Carbs in Bacon – Everything You Need to Know 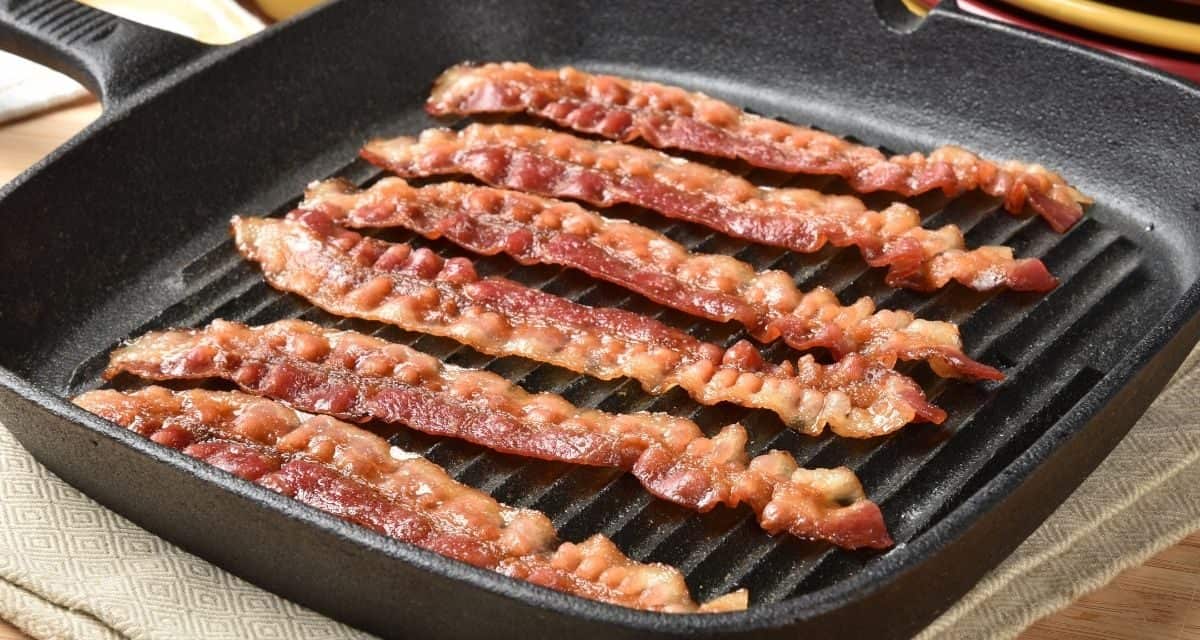 Bacon has been associated with the keto diet for the fact that it is rich in protein and fats and low in carbohydrates. The number of carbs in bacon will depend on the type of bacon and serving size.

According to the USDA, one slice of pan fried bacon (8g) has 0.1 grams of total carbs.

There are many types of bacon and ways in which bacon can be prepared. If you’re on a dirty keto diet, which allows you to eat fast food meals, then it might be difficult for you to trace the amounts of carbohydrates in the food you eat.

This article shall help you determine the levels of carbs in the different bacon types, recipes, and menus of some of the well-known fast-food chains.

How Many Carbs In Turkey Bacon?

Turkey bacon, as its name implies, is a type of bacon made from turkey meat. Like any other kind, it is chopped, formed into strips, cured, and sold into the market as an alternative to its pork counterpart.

You may prepare it the same way as you do for pork bacon. It can be pan-fried or baked in an oven until it reaches a golden color and crispy texture.

The advantage of turkey bacon is that it contains less fat since it is leaner than the classic pork bacon. However, when it comes to the number of carbs in turkey bacon, it has slightly higher carbs than pork.

Two slices of turkey bacon (approximately 16 grams) contain 0.5-0.7 grams of carbohydrates, depending on the brand. The amount of added sugar used for the sweet flavor is the factor that varies the levels of carbs in turkey bacon.

Its carb content is greater than that of pork bacon, but its calories are fewer.

Turkey bacon has 60 calories for two slices, while the pork counterpart has 82 for the same amount. The reason why some people choose turkey over pork is the risk of heart disease linked to the consumption of red meat.

That being said, turkey bacon is still a type of cured and preserved meat. It contains nitrates, sodium, and saturated fat. Therefore, it must be consumed moderately.

How Many Carbs In Bacon And Eggs?

One of the most loved combo breakfast meal is probably bacon and eggs. They’re like bread and butter that usually comes in pair.

This classical breakfast menu has been a preferred choice by those who are on a keto or low-carb diet for many years.

One fried egg (large-sized) consists of 0.4 grams of carbs. A slice of cooked bacon, on the other hand, has 0.1 grams, whether it is baked or pan-fried. These amounts are according to the United States Department of Agriculture (USDA) data.

So, for instance, if you’ll have a meal of three slices of cooked bacon with two eggs, it could only give you a total of 1.1 grams of carbs. To better enjoy this combo, there are tons of bacon and eggs recipes that you could have alternately for variations.

How Many Carbs In Canadian Bacon?

Canadian bacon is different from the American or classic bacon for the fact that it is cut from pig’s loin instead of the fatty belly. It is leaner, and comes in rounded slices rather than the long thin strips of traditional bacon.

Canadian bacon is served pre-cooked. It can be smoked or unsmoked, depending on the manufacturer and curing. A 14 gram slice of Canadian bacon offers about 0.3 grams of carbohydrates.

How Many Carbs In Bacon Bits?

Bacon bits are dried and cooked bacon cured with preservatives and broken down into tiny bits. You can have them homemade, but there are also a variety of brands available in the market.

There’s another variation called imitation bacon bits. This version is made of soy or textured vegetable protein that is cured and flavored to achieve the same taste as that of the real bacon bits.

It’s a much cheaper choice that offers a longer shelf life too.

This bacon recipe includes wrapping the Brussel sprouts in the pieces of bacon and pan-searing them or baking in the oven. With the right seasoning, this dish is not only tasty, but it also offers benefits for a keto dieter.

A cup of Brussel sprouts contains about 5 grams of net carbs. The total carb content of this recipe per serving depends on the amounts of the ingredients you mix it with.

There’s several ways you can make bacon brussel sprouts for keto – from wrapping the sprouts in bacon and baking in the oven, to making into casseroles.

This is a favored choice for a keto meal because the Brussel sprouts provide plenty of vitamins and minerals that the body needs. Even if you’re not a fan of brussel sprouts, bacon makes everything taste good.

How Many Carbs In A Bacon Egg And Cheese Biscuit?

In restaurants and fast food menus, the carb amount is not as commonly shown as the calorie content. But some food chains post their menu’s nutritional value on their websites.

A serving of the McDonalds Bacon Egg and Cheese Biscuit, for example, carries 39 grams of total carbs and 460 calories.

If you haven’t tried it yet, it is a breakfast sandwich that is made of smoked bacon, scrambled egg, and a slice of melted cheese that are all nestled in between two buttermilk biscuits.

To make this meal low carb you will need to remove the buttermilk biscuits, or muffins, as they are known in other countries.

How Many Carbs Are In A Burger King Bacon Egg And Cheese Biscuit?

Another option to have a bacon breakfast sandwich fast and easy is by ordering one at burger shops such as Burger King.

The Burger King Bacon Egg and Cheese Biscuit contains 29-33 grams of carbs. Like that of McDonald’s, the Burger King version also has slices of bacon, scrambled egg, and American cheese in it.

The amount of carbohydrates depends on the standard serving size of the branch or country. This, together with its McDonald counterpart, is also a great meal choice for bacon lovers and keto dieters, especially those who are on a dirty keto plan, as long as you don’t eat the bun.

A complete serving of Wendy’s Jr. Bacon Cheeseburger, that is, with the buns and mayo, has about 380 calories with around 25 grams of carbs.

It is a burger sandwich that has a small-sized and square patty and two strips of hickory-smoked bacon. It also contains a slice of American cheese and tomato, a fistful of lettuce, and a spread of mayonnaise.

All these are settled between a toasted bun, which you would need to remove if you were planning to eat this when following the keto diet.

How Much Bacon Can I Eat On Keto?

When on a keto diet, bacon falls on the “always” category. That means that bacon is highly encouraged in this type of diet. Participants on keto should have a low-carb intake of food, specifically up to less than 50 grams total carbs per day, or 20 grams of net carbs per day.

Bacon, as previously mentioned, could only give 0.1 grams per slice, as it is mostly protein. Aside from that, bacon can also be a great source of natural sodium. The USDA recommends a 2300 milligrams daily allowance for sodium.

At least three slices of bacon are appropriate to be added to your diet to help achieve these recommended intakes. Eating bacon can also increase electrolyte production. Lack of electrolytes may cause fatigue and cramps.

However, the overconsumption of bacon can be harmful to your total health. Most brands of bacon are cured through the use of nitrates and other artificial preservatives that could impose health risks to the body.

Therefore, it is better to keep the consumption in moderation. If you are on a keto diet, you may add other nutritious yet keto-friendly foods to your meals to achieve variation and more health benefits.

Another way to reduce the risk that the preservatives carry is to buy nitrate-free bacon or make homemade ones that are cured naturally with salt.

Bacon is one of the most favored classical breakfast dishes that could satisfy you and your diet plans. It is also a flexible type of food as you can turn it into different recipes.

While it is crucial to monitor your carb intake for a keto diet, it is also critical to ensure that you are having sufficient amounts of nutrients. 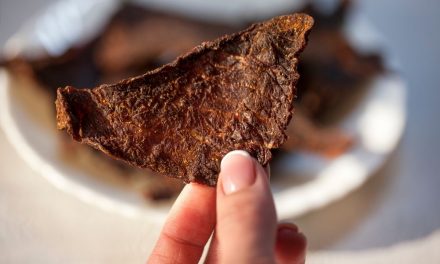 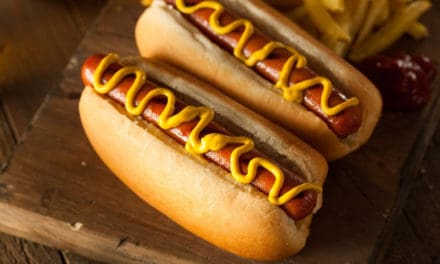